Data visualization is the art of representing complex data sets in a visually appealing way. It can help your reader better understand what they're looking at, and it's an ideal way to make sense of large or confusing sets of data.

For example, imagine reading a report about a study that involved tracking participants' sleep patterns for three months. A table with the raw numbers for each participant could easily be overwhelming, but if presented in a simple graph, it would be much easier to interpret them.

What are the benefits of data visualisation?

Data visualisation is a method of depicting information to be more easily consumed. It's ideal for representing and analyzing complex data and streamlining processes of decision making. It can be used to convey anything from real-time stock prices to the number of movies in a given genre.

We live in an age where it's easy to get inundated with information, resulting in some people feeling stressed or overwhelmed. Data visualisation is one way to cut through the clutter by presenting information in an easier-to-process format.

We've all seen charts, graphs, and maps before, and you've probably heard the phrase "a picture is worth a thousand words." This one sentence goes a long way toward summing up the power of data visualisation: it allows us to process images faster than words, making it easier for our brains to retain information.

Besides being more engaging than text alone, visualised data is also more effective at influencing your audience's behaviour. When presented with various options and data points, visualisations make it easier for you to sift through what matters most. And that means you'll get more out of the numbers—and they'll get more out of you.

Why not start incorporating visualisations into your communications today with such clear benefits? Here are 10 of the best data visualisation examples to inspire you. 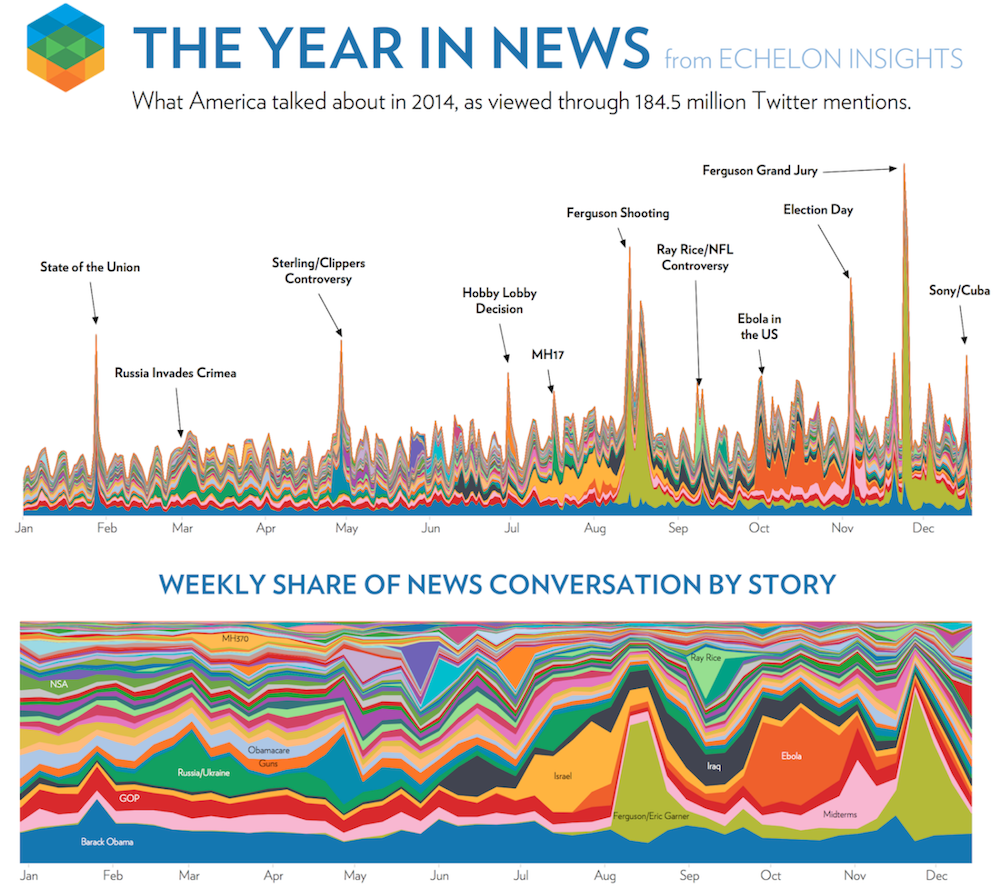 When news breaks, Twitter is one of the leading social media platforms we turn to see what's happening. 2014 was a historic and tumultuous year, rife with larger-than-life stories from around the globe.

There were plenty of news topics to cover, with the data showing eleven primary issues discussed in 2014. Whether we're debating, hashing out, or exploring every angle, Twitter is also an invaluable source of data about the national conversation.

Echelon Insights took a look at more than 184 million Tweets across 80 different news events this year to get a snapshot of what mattered and to whom. Displayed in the infographic, based on a study of Twitter activity, the Ferguson/Garner cases were the most discussed among ordinary users, followed by Ebola and the midterm elections. However, the midterm elections dominated the year among political insiders, followed by Russia and Ukraine, Iraq, and Obamacare.

The study also finds that liberal activists are three times as likely to mention the Republican Party in their tweets than their conservative counterparts. In contrast, conservatives are twice as likely to say President Obama, controlling for the overall volume of news conversation in these groups.

2. The World Cup Through The Years 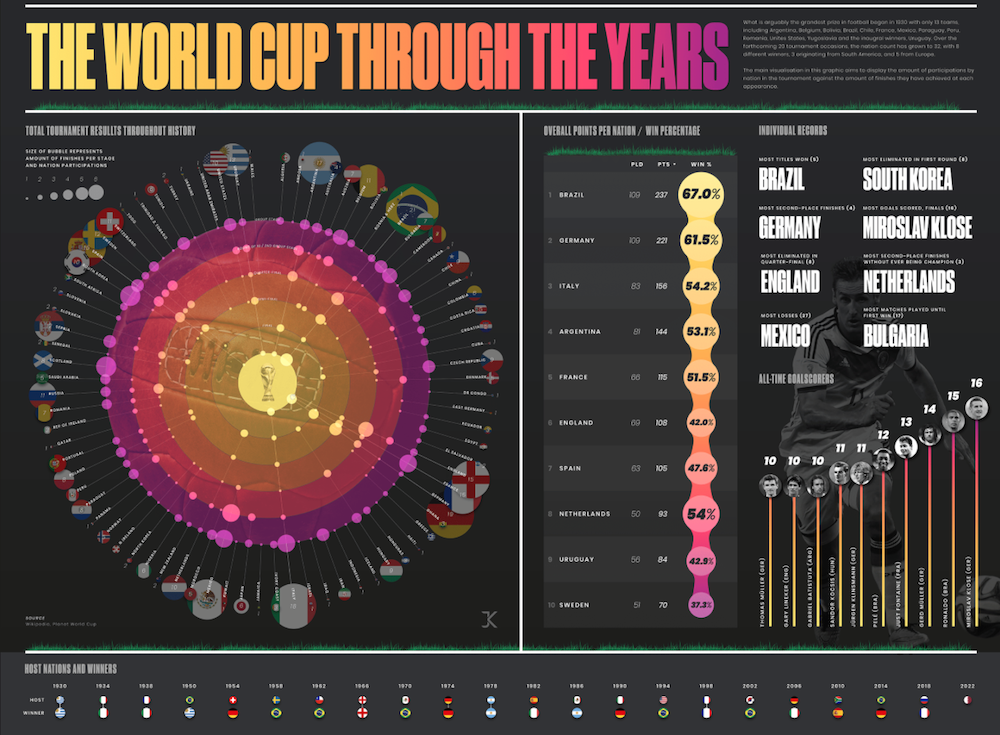 In 1930, 13 countries participated in the first World Cup tournament. Over the next 20 contests, participating nations grew to 32, with eight different winners: 3 from South America and five from Europe.

The world has watched 32 teams play at 20 World Cups. Each column of circles represents a team. The columns are arranged from left to right in order of the number of times a nation has competed. The colors represent how many times they have won.

3. Past, Present, and Future of Carbon Emissions 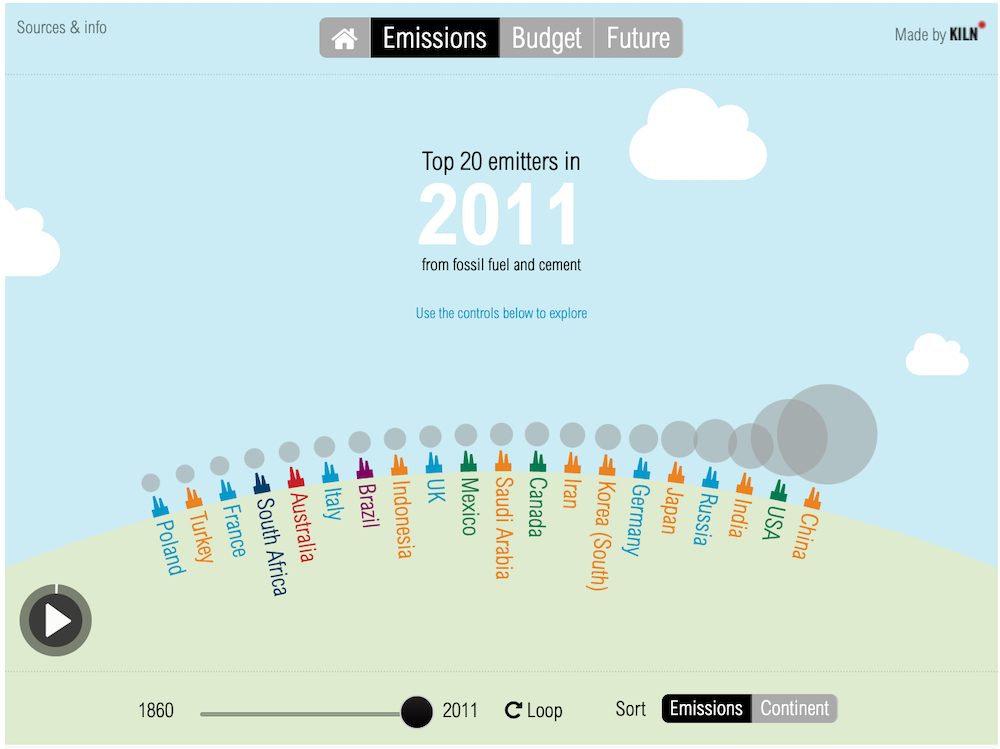 An infographic from the World Resources Institute in 2014 shows the history of climate emissions and what needs to happen to stay within the world's "carbon budget" and prevent some of the most disastrous impacts of climate change.

The carbon budget is a threshold for global warming. If we emit less than 2900 gigatonnes of CO₂, then we have an even chance of keeping the Earth's temperature from rising beyond 2 degrees Celsius.

The interactive draws on WRI's Climate Data Indicators Explorer (CAIT 2.0) data. The research from the IPCC reveals that although the world has used up nearly two-thirds of its carbon budget, it is not too late to achieve climate change mitigation goals. As of 2011, the world's top emitters have changed significantly over time, with emissions stemming mainly from fossil fuel use, cement manufacturing, deforestation, and land-use change. 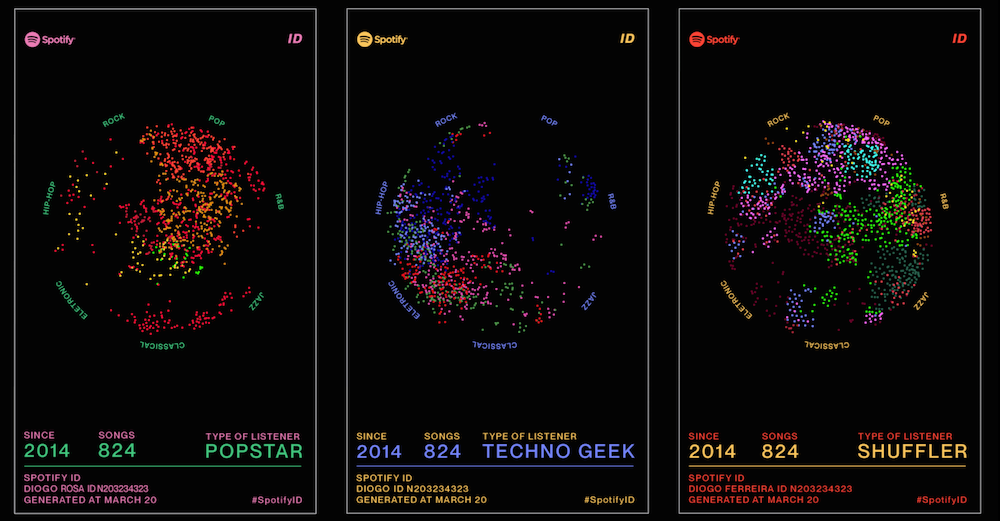 Music is an integral part of most people's lives. Most everyone wakes up to the sound of their favorite song or listens to their favorite playlist as they get ready for school or work.

But how can we share our musical identity with family, friends, and the world around us? Not just our favorite song but also the sonic fingerprint of our life on Spotify? That's where Spotify ID comes in.

Spotify ID is an app that allows us to generate a unique data-based visualisation of our musical identity, a digital code to share, and access a generated playlist based on our life on Spotify.

And that's not all—Spotify ID also provides the ability to combine different IDs to create one perfect playlist for each group of friends, no matter their differences. 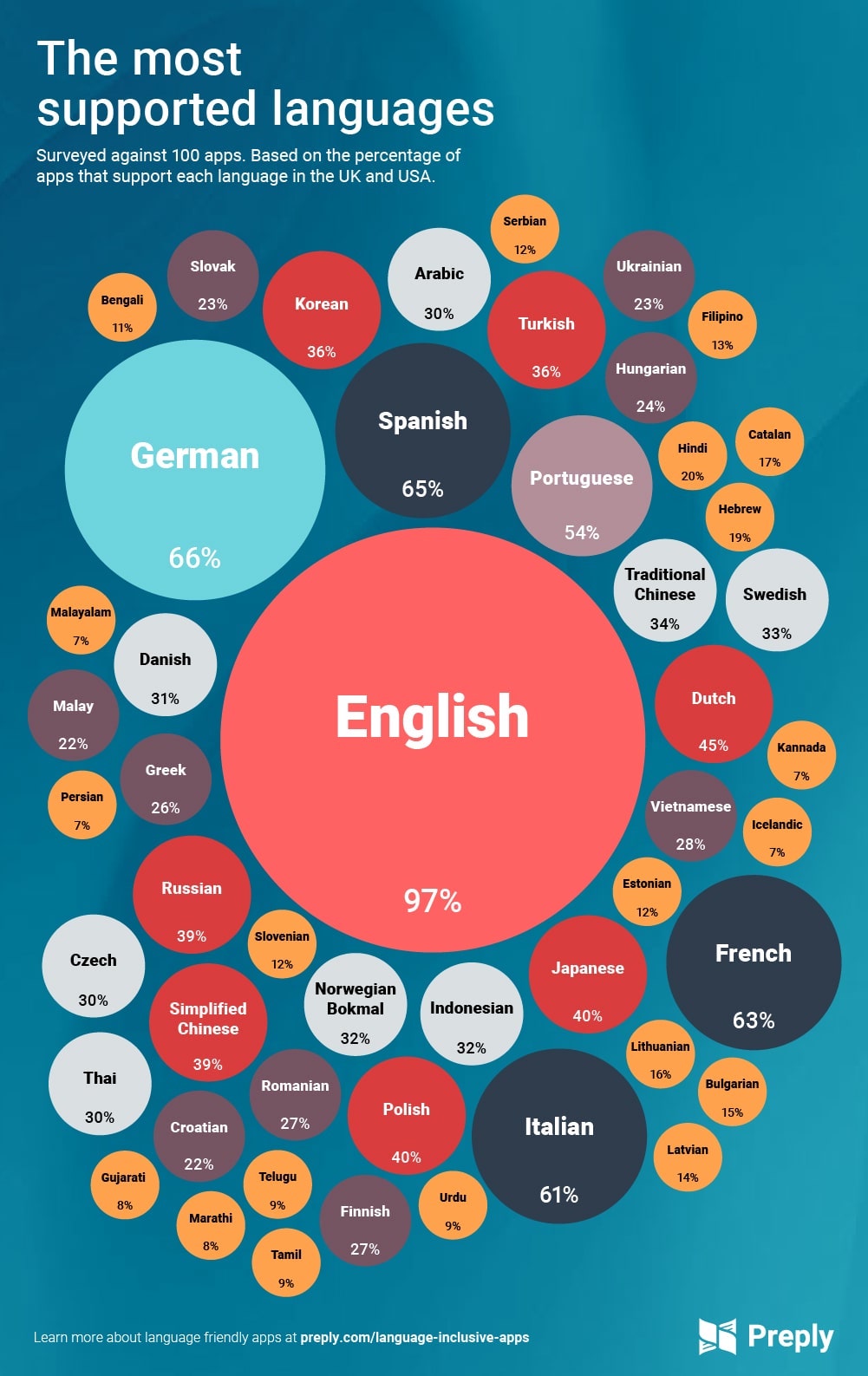 When it comes to learning a language, one of the best things you can do is change the language settings on your smartphone. For example, if you are taking German lessons, switching your phone settings to German ensures that the content you are consuming is also helping you pick up new vocabulary and practice reading comprehension.

This infographic shows the most supported languages across 100 popular smartphone apps in the US and the UK.

English is the most widely supported at 97% and is depicted as the largest circle in the centre of the graphic. German comes in second in the blue circle at 66% followed by Spanish at 65%.

Practicing German or Spanish by switching smartphone settings would be useful for American language learners according to this graphic. However, practising Persian this way would not be as helpful as it is not as widely supported. 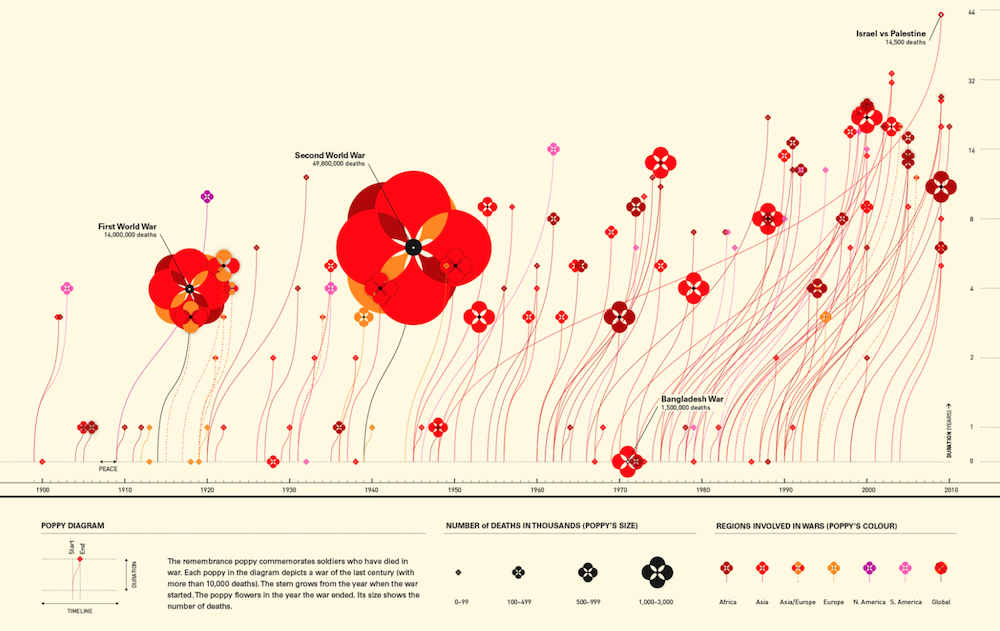 This work visualises nearly 95 million people whose lives were affected by war in the 20th century. Data made available by The Polynational War Memorial makes clear that war was a near-constant characteristic – allowing just two years of peace – in the last century.

This graphic only shows conflicts with over 10,000 deaths – still, it is not feasible to label every war, but it helps provide a better overview of the significant wars throughout history. Overall, it reveals patterns in major wars' timing, duration, and death toll. 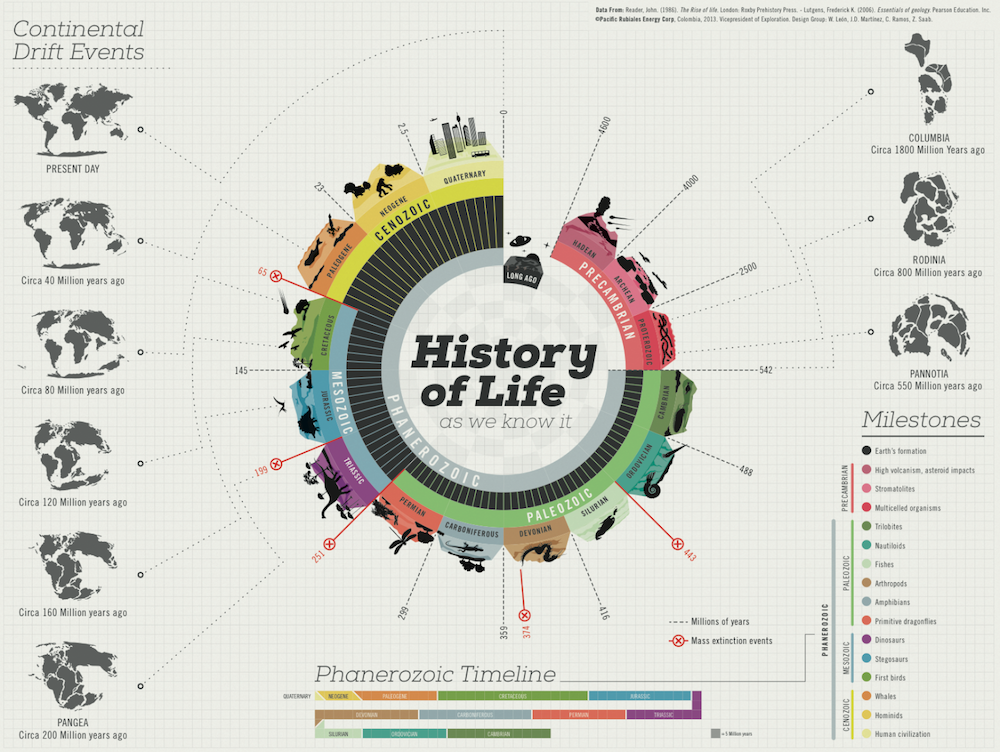 This illustration shows how easy it is to comprehend our development in the sands of time. For example, no one knows how the Earth looked 200 million years ago or the different stages of the Phanerozoic timeline. The infographic identifies the milestones in the development of our planet and straightforwardly documents them.

This infographic details the major extinction events that have shaped our planet for millions of years. It is interesting to see how these various events have had a catastrophic impact on life on Earth and have continuously changed the landscape in which we live. 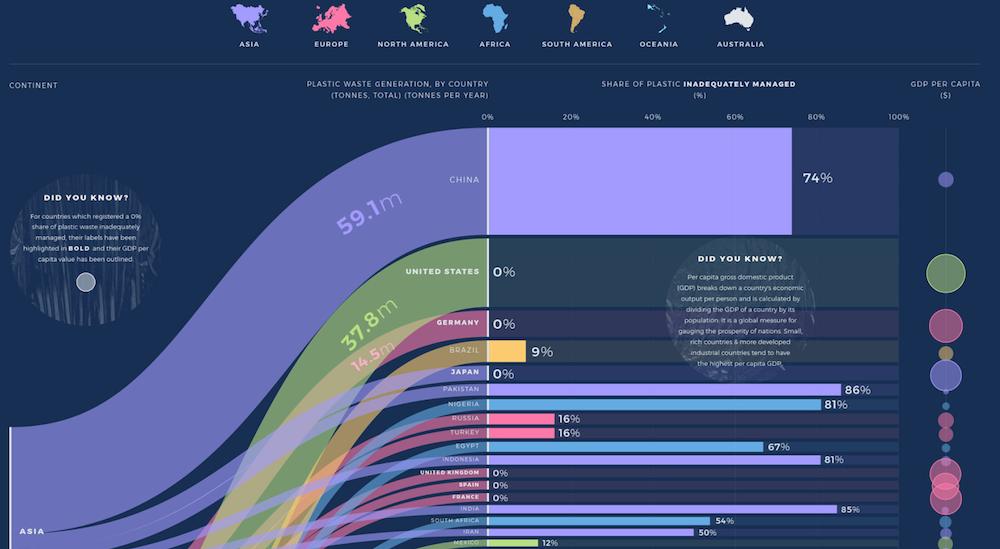 Countries inadequately manage a large percentage of plastic waste. This visualisation explores which countries in 2010 produced the most significant amount of plastic waste. Still, more importantly, it queries whether the management of this plastic waste correlates to a nation's Gross Domestic Product per capita.

The graph also shows the distribution of per capita plastic waste generation by continent, leading to segregation by country in ascending order of tonnes per year. It takes into account population size and total waste generation.

Approximately 50% of waste generated in the US is inadequately disposed of, including disposal in dumps or open, uncontrolled landfills, and lost to the surrounding environment. Not fully contained waste is at risk of leakage into the natural environment into oceans via waterways, winds, and tides. 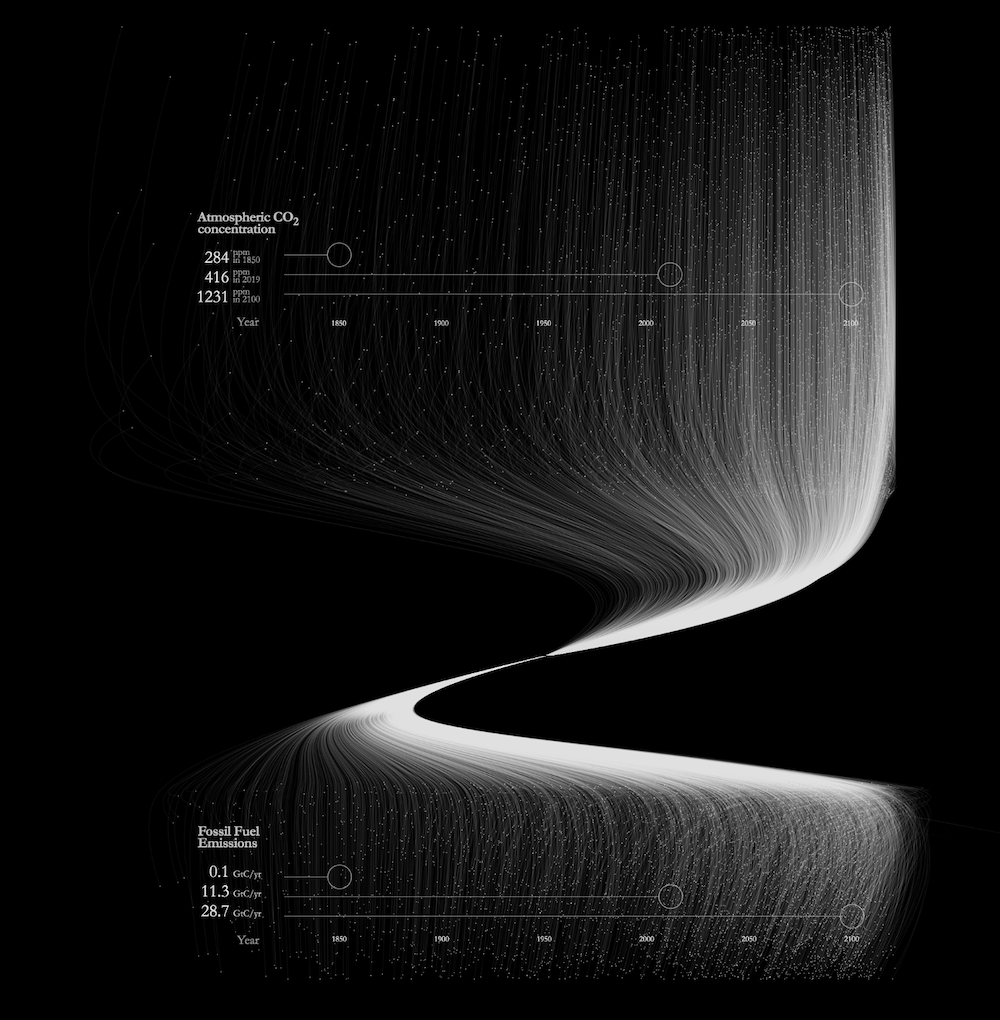 The Fossil Fuel visual provides a penetrating look at one of the most pressing environmental issues—the increasing amount of carbon dioxide in the Earth's atmosphere.

This infographic presents a timeline of CO2 concentration in the atmosphere since the late 19th century.

It also projects CO2 levels in the future. The trend shows an increase in fossil fuel emissions since the Industrial Revolution and a projected increase in CO2 levels until 2100. 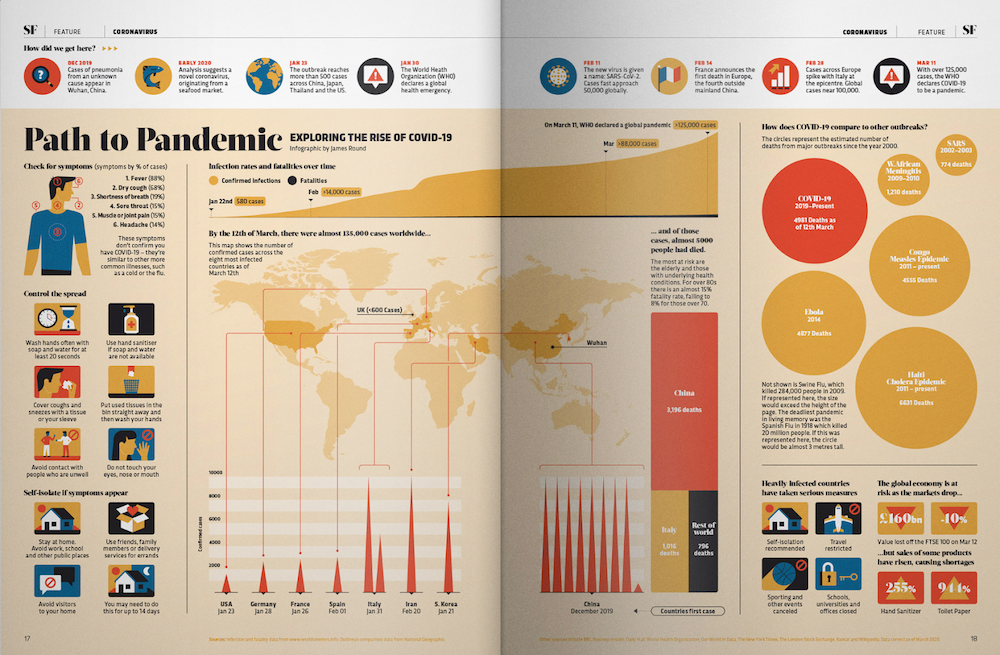 The world has changed. Two years ago, if you had told us that we would all be wearing masks and working from home, many of us would have laughed in your face.

The COVID-19 pandemic is still happening, and we're all still trying to process what that means.

Data visualisation is one way to make sense of the numbers and patterns: it helps us see the big picture and even get a glimpse of what's coming next.

James Round put together this comprehensive infographic filled with details about the virus so far—everything from where it started to how our governments have responded to it.

While data is invaluable for improving our daily lives, making heads or tails of the underlying theme is not always easy. Data visualisation offers a solution to making sense of the information we collect.

The visualisation allows us to see patterns within our data that might otherwise go unnoticed. Because we can process visual information more quickly than text-based information, visual data provides a more efficient way to conclude what we have collected.

If you enjoyed this article then why not check out our guide about Elasticsearch get mapping or how to remove a field in Elasticsearch.